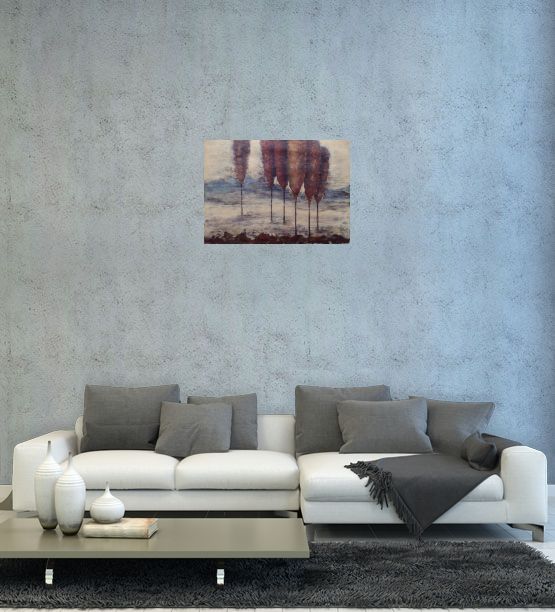 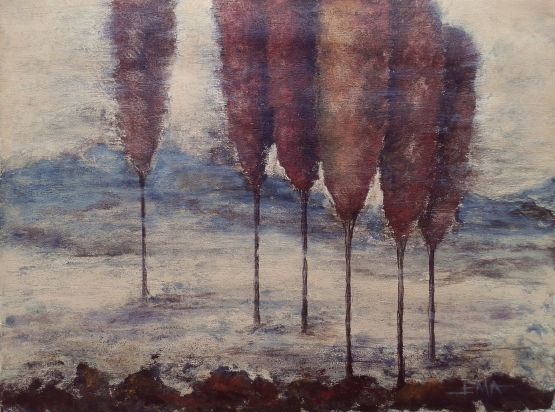 All prices are VAT INCLUDED.

FREE SHIPPING for domestic orders (only within Turkey).

Almost surreal scenery of a clump of poplar trees in a misty morning. Painting is inspired by a Greek legend. Find the legend here after:
Long ago the poplar used to hold out its branches like other trees. It tried to see how far it could spread them. Once at sunset an old man came through the forest where the poplar trees lived. The trees were going to sleep, and it was growing dark. The man held something under his cloak. It was a pot of gold - the very pot of gold that lies at the foot of the rainbow. He had stolen it and was looking for some place to hide it. A poplar tree stood by the path. "This is the very place to hide my treasure," the man said. "The branches spread out straight, and the leaves are large and thick. How lucky that the trees are all asleep!"He placed the pot of gold in the thick branches, and then ran quickly away. The gold belonged to Iris, the beautiful maiden who had a rainbow bridge to the earth. The next morning she missed her precious pot. It always lay at the foot of the rainbow, but it was not there now. Iris hurried away to tell her father, the great Zeus, of her loss. He said that he would find the pot of gold for her. He called a messenger, the swift-footed Mercury, and said, "Go quickly, and do not return until you have found the treasure." Mercury went as fast as the wind down to the earth. He soon came to the forest and awakened the trees."Iris has lost her precious pot of gold that lies at the foot of the rainbow. Have any of you seen it?" he asked. The trees were very sleepy, but all shook their heads."We have not seen it," they said."Hold up your branches," said Mercury. "I must see that the pot of gold is not hidden among them." All of the trees held up their branches. The poplar that stood by the path was the first to hold up his. He was an honest tree and knew he had nothing to hide. Down fell the pot of gold. How surprised the poplar tree was! He dropped his branches in shame. Then he held them high in the air. "Forgive me," he said. "I do not know how it came to be there; but, hereafter, I shall always hold my branches up. Then every one can see that I have nothing hidden."
Since then the branches have always grown straight up; and every one knows that the poplar is an honest and upright tree.
Painting is framed.
FREE SHIPPING WORLDWIDE
MORE ARTWORKS FROM ARTIST